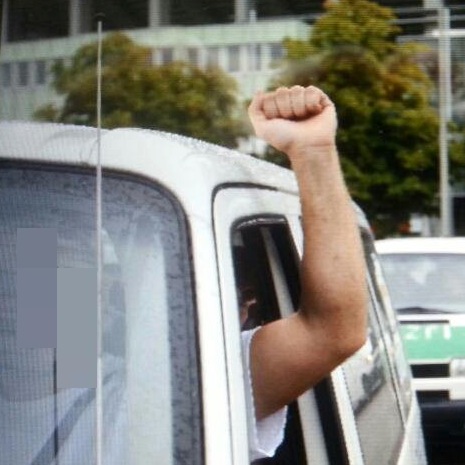 In the morning of September 14th, the »Convoy of Hope« startet from Leipzig, followed up by cars from Dresden, Prague and Vienna. Destination was the boarder location Nickelsdorf (Austria), where thousands of refugees arrived, who where brought to the border by Hungarian authorities after eviction of the camps in Hungary. Since today, September 15th, the criminalisation of refugees and their supporters in hungary are increasing. »Coming from Germany, a series of reactions of compartmentalisation started. One border after the other gets closed. Everyone tries to get from Austria to Germany as fast as possible. Today we helped hundreds of exhausted on a stage of their journey, because when injustice becomes law, Refugee support becomes duty«, says Jan Liebig from the »Convoy of Hope«.

On monday, Germany partly closed it’s borders to Austria and reintroduced border controls. The »Convoy of Hope« understands itself as a part of a movement against the politics of Fortress Europe. »While a few days ago everybody kept talking about the wave of hospitality among the germans, the closing of the innereuropean borders was prepared. People, who are desperate, will not be stopped by that. Who closes the borders now, makes safe escape routes impossible and accepts misery and death at the borders. Because of that, in the next days we will find ways to undermine these coldhearted politics of separational politics.«

In contrast to the youngest increase of asylum law through the grand coalition and the cancellation of the Schengen convention, thousands of people where welcoming Refugees and supported them on their journey. Jan Liebig: »We understand ourselves as part of a transnational movement of solidarity against the deadly Fortress Europe. The refugees, supported by the solidarity of many people is shaking on the foundations of the inhuman Dublin system. We see ourselves in a row with them. In the support of thousands of Refugees, appears a Europe of solidarity and without borders. That’s what we‘re fighting for.«

Right now, the convoy debates about further actions of protest against the german borders.