A closer look at young Communists in the federal election 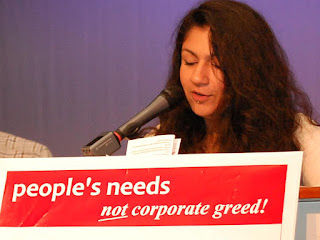 Rebel Youth takes a closer look at four of the seven young Communists in the federal election, their ridings and why they’re running. All are members of the Young Communist League and running for the Communist Party of Canada

Hochelaga is a poor riding in the east of Montreal including the Olympic stadium. Once a working class area home to the famous Quebec folk singer La Bolduc, the area was hit hard by deindustrialization and factory closings. It has been held by the Bloc and, most recently, the NDP and provincially Quebec Solidaire is a serious contender.

Marianne Breton Fontaine grew up in the riding. She is a student activist, studying law, and outspoken for women’s rights and feminism. “Although the neighborhood is changing, the question of poverty is well known. Nationalization of industry, such as the automotive industry which has completely left Quebec, and expanding public services is going to create jobs and will help a lot of the families here looking for work,” she says. “Many people in the riding work on minimum wages, not least women. Raising the minimum wage to $20, of course it is the federal wage, but it will have an impact – a much needed push towards the general raise in wages,” she adds.

“The party also has an elaborate platform on the environment, with big ideas like public ownership of wind power and green energy to move away from Hydrocarbons. We are close to the St. Lawrence river and this area is all owned by the Montreal Port Authority. Although this is a federal agency, it operates just for the big corporations. There is not even public access to the river, nor a policy to make this potentially beautiful area usable by the community — which we think must change.”

Toronto Centre has significantly changed riding boundaries since the last election, loosing the affluent community of Rosedale, as well as Bloor Yorkville and the Esplanade, but retaining many working class and poor neighbourhoods like the very densely populated St Jamestown and student housing. The riding is traditionally Liberal with the NDP challenging them in second place.

“My riding includes Ryerson University which is attended by thousands of students. Education is very important to me as I have also struggled to pay my tuition and feed myself and pay housing fees. The Communist party of Canada wants to increase federal supports for universal public education at all levels, eliminate tuition fees for post secondary, shift from loans to grants and build more schools and colleges,” she says.

An author, artist, and the organizer of Toronto’s Young Communist League, Mariam became politically active in youth organizations struggling for LGBTI* equality rights. “I am running because politics is too often thought to be a game for white older men and sometimes women. I  am trying to show people, especially youth, that we can collectively change things and that young people are politically aware and understand that politics does not end nor start at the electoral system. A prime example of youth being politically aware and active is the Young Communist League.”

This riding, on the southern tip of Vancouver Island, is another electoral district which has seen changes to its boundaries recently.  The NDP and Green Party are both contenders for the seat. Tyson Strandlund grew up in the riding and is Métis, supporting indigenous sovereignty. Currently studying history at the University of Victoria, which is in an adjacent riding, he is the organizer of the local Young Communist League.

“I’m running because I believe there’s an urgent need for socialism in light of the economic and environmental crisis,” Tyson says who believe that, contrary to the big parties claims in this election Canadians need to work less and make higher wages.

“I’m also trying to engage youth in politics, and get people talking about alternatives to austerity. For example, I’m talking most about the environment, education, and democratic nationalisation.” So far Tyson has made a splash, with community TV interviews on Citizen’s Forum as well as print media. “I’m getting a mixed response from students, but some people think that it is great that we are running. Lots of students have said they would like to see free, quality education, as well as wiping student debts,” Tyson adds, welcoming the Green Party’s call to eliminate fees and noting that our platform has long called for this position and goes significantly further.

Burnaby North-Seymour is perhaps one of the most glaring examples of Harper’s gerrymandering. The old riding of Burnaby, which includes Simon Fraser University and has long been an NDP seat, is linked to the high-income community of Seymour – to which it has no geographical connection other than a bridge stretching over the wide Burrard Inlet.

Brent Jantzen is a young worker and longshoreman as well as the Vancouver secretary of the Young Communist League. “I am running in order to discuss a true alternative for the working class. The Liberals and Conservative parties work in the interest of the big corporations, and the NDP and Greens don’t consistently focus on issues that affect working people of Canada,” Brent says. “Capitalism and systems of oppression enforce inequality and create a constant state of war,” he adds, noting that the Communist Party is fighting for fundamental change. “It is important for there to be a candidate to voice these demands.”

“I am talking about job creation in Canada and raising the minimum wage in order to provide a more comfortable living standard for the working class of Canada,” Brent says. “In addition, I strongly oppose the expansion of the pipelines.”  Brent joined in the actions on Burnaby mountain where indigenous and environmental activists were arrested for blocking the development of the pipeline route. Another key issue for Brent is Canada’s participation in US wars and aggression. “I strongly oppose our involvement in NATO, the bombing of Iraq and Syria, and the support the Harper government has given the ultra-right government in the Ukraine as well as apartheid Israel.”