This Tuesday during the Security Council of the United Nations (UN) in which they discussed the political and humanitarian situation of the Bolivarian Republic of Venezuela, Venezuelan Foreign Minister Jorge Arreaza, reported that last weekend, as part of the operation to force the entry of a supposed humanitarian aid and attack Venezuela, the US government mobilized troops through the Caribbean and bought weapons in Eastern European countries with the aim of arming the Venezuelan opposition.

“We take this opportunity to denounce here the information we have received from friendly countries such as Cuba or Russia, a mobilization of military troops in the Caribbean or the purchase of weapons in Eastern Europe to direct them to the Venezuelan radical opposition and generate a military intervention”. He indicated

The Venezuelan Head of Foreign Ministry polemicized the reason why a US warship was on an island in the Caribbean, near Venezuela.

From New York, FM Arreaza also revealed that the United States government organizes, finances and leads an international operation with support from the Venezuelan opposition to attack Venezuela.

In this regard, he stressed that the truck that was burned on the Colombian side with alleged humanitarian aid, also contained tools to initiate new ‘guarimbas’ in the country and that thanks to the Venezuelan public order forces, the alleged aggression was neutralized without using lethal force.

“They had wires, nails to make weapons (…) these are instruments that we are accustomed to being used by the Venezuelan opposition”. He emphasized that the greatest number of injuries was recorded among the Venezuelan officers guarding the border.

He also called on the opposition to accept the proposal of the ‘Montevideo Mechanism’ for a dialogue to solve the problems of Venezuela along with the Constitution. He reiterated that the Government of President Nicolás Maduro endorses the referred Mechanism.

“The coup d’état has failed (…) even the same group of cartelized countries against Venezuela was divided in this aspect because they do not want the military conflict of the United States”, he added.

“Will it be too much to ask that in this Council those present sign and subscribe a document opposing the use of force against Venezuela (…) or is it going to let the United States keep all the options on the table?” He asked.

On that point, said that what happened on February 23 on the border between Colombia and Venezuela was the “last chapter of a coup that failed”.

He called for respect, international law and the Constitution of Venezuela, while ratifying the Bolivarian Government’s will to build “a solution without interference, or intervention by anyone, much less the US”.

“I hope the White House gives Mr. Guaidó permission to sit down and talk”, he said.

Regarding violence on the border with Brazil, the Venezuelan diplomat reported that investigations have already begun into the violent events that occurred in Santa Elena de Uairén, Bolívar state.

“Yes, a group of people died in Santa Elena de Uairén (…) we are investigating the facts.

It was a group of armed opposition people trying to take a military unit and they were restrained by the progressive and differentiated use of force, police tools to prevent public order from being disturbed (…) what happened and how did those people die? We are investigating all the facts”, emphasized the Minister.

On the other hand, the FM called the Secretary General of the United Nations, António Guterres and the UN High Commissioner for Human Rights, Michelle Bachalet, to pronounce themselves and take preventive measures against a military action in Venezuela.

“Will we let a country to be invaded with bombs and using International Law?”, He said.

Finally, Minister Arreaza thanked the creation of a group of 60 international delegations of the United Nations to defend the principles of its founding Charter and defend the peoples that are attacked and besieged as Venezuela is today.

He stressed that the Security Council should be presented as a space to avoid war and for a multilateral agenda to be imposed against unilateralism that respects international law. 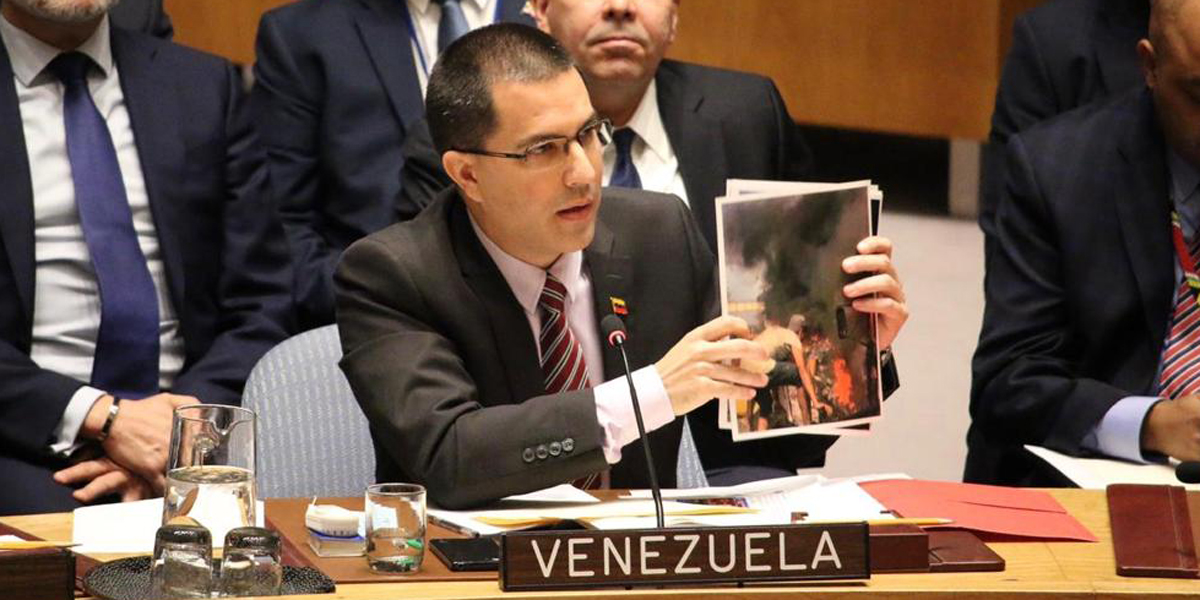