Last Thursday, April 25, the Foreign Minister of the Bolivarian Republic of Venezuela, Jorge Arreaza, denounced to the world the harmful effects of the economic-financial blockade imposed by the United States government on the oil country.

From the headquarters of the United Nations Organization in New York, the diplomat made public in a press conference the fact sheet of the actions of the White House on Caracas.

Following is the full report, published by the US Department of State: https://www.state.gov/p/wha/ci/ve/291324.htm.

The policy of the United States with Venezuela focuses on guaranteeing free, fair and transparent elections that bring prosperity and democracy to the people of Venezuela. To serve this purpose, the United States has undertaken a series of firm political actions since 2017 aimed at putting pressure on the old Maduro regime and supporting democratic actors.

ASSISTANCE AS A RESPONSE TO THE CRISIS IN VENEZUELA

The assistance of the United States to support the regional response to the crisis includes:

• Total regional support is more than $ 256 million, including:
• More than $ 213 million in humanitarian response.
• $ 43 million in economic and development assistance.
• On January 24, Secretary Pompeo announced that the United States is ready to provide an additional $ 20 million in initial humanitarian assistance to people within Venezuela.

The US government has made more than 150 designations of persons and entities in Venezuela since 2017 through Executive Orders (E.O.) and the Kingpin Law. This includes 10 sets of designations only in 2019 of multiple people, entities and property listings. Such actions ensure that the old Maduro regime can not depend on the financial system of the United States for his destructive practices.

• E.O. 13692 (March 8, 2015): addresses to those who participate in undermining democratic processes or institutions, acts of violence or violations of human rights, actions against freedom of expression or peaceful assembly, public corruption by high-level officials of the government and “status-based” designations for current or former Venezuelan government officials. 80 actions have been carried out (73 people, 6 entities, 1 identified aircraft) since 2017.

• E.O. 13808 (August 24, 2017) and E.O. 13835 (May 21, 2018): sanctions that deny the financing of the regime and protect the financial system of the United States from complicity in corruption. It expanded in 2018 to deny regime officials the ability to sell public assets at “discount” prices at the expense of Venezuelans.

• E.O. 13827 (March 19, 2018): prohibits transactions of US persons in digital currencies, tokens, and coins issued by, for, or on behalf of the Maduro regime, including petro.

• Organization of American States (OAS): in June 2018, the General Assembly of the OAS declared that Venezuela’s May 2018 presidential elections lacked legitimacy and did not meet international standards. The Permanent Council of the OAS did not recognize the second term of Nicolás Maduro and stressed the constitutional authority of the democratically elected National Assembly. On January 24, 2019, the United States and 15 other member states of the OAS recognized Juan Guaidó as interim President of Venezuela. On March 27, 2019, the OAS approved, with 19 member states that voted in favor, the resolution “Humanitarian Assistance in Venezuela”. Another OAS statement on March 27 reiterated its position against Russian incursions, calling them unconstitutional. The OAS adopted a resolution to accept the Guaidó’s candidate Gustavo Tarre as Venezuela’s representative to the Permanent Council on April 9.

• United Nations (UN): Since 2017, the United States has convened four meetings on Venezuela, including two emergency meetings in 2019. The United States presented a resolution at the UN Security Council about Venezuela on February 28, which Russia and China vetoed On April 10, Vice President Pence delivered a speech at a special session of the UN Security Council on the crisis in Venezuela.

• The Lima Group (LG): the group, originally 12 countries (now 14), was formed in August 2017 to find a peaceful solution to the crisis and lead regional efforts. They issued a 17-point statement on February 4, 2019, indicating that Argentina, Brazil, Canada, Chile, Colombia, Costa Rica, Guatemala, Honduras, Panama, Paraguay and Peru “reiterate their recognition and support for Juan Guaidó” as Acting President from Venezuela. Thirteen countries joined themselves to a statement dated March 26 condemning the military provocation in Venezuela after the arrival of Russian military personnel in Venezuela. The group met in Chile on April 15 and issued a 17-point statement asking for support from the UN, the ICC and other international organizations; rejecting military intervention; and urging the unification of the process among the partners that work to support Venezuela.

• Inter-American Development Bank (IDB): with the support of the United States, the Board of Governors of the IDB approved a resolution in recognition of the representative of Juan Guaidó, Ricardo Hausmann, on March 15, 2019. In an effort not to recognize Hausmann, China refused to attend the annual IDB meeting in Chengdu, even after being threatened not to attend by the US and the Lima Group. In response, China canceled the meeting.

• European Union (EU): the International Contact Group (ICG) of the EU concluded a meeting on March 28 in Quito with a statement proposing a road map to call for elections in Venezuela. The European Parliament issued a non-binding resolution about Venezuela on March 27, reiterating support for Guaidó and the National Assembly, requesting additional sanctions, denouncing Cuban influence in Venezuela and denouncing the arrests of Marrero and Requesens.

• Juan Guaidó announced his interim presidency under the Venezuelan constitution in January.

• More than 1,000 members of the army recognized Juan Guaido as interim President, deserted from Venezuela and entered Colombia, where they receive assistance from UNHCR and the Colombian government.

• US refiner Citgo is now under the control of the interim government.

• Venezuela’s oil production fell to 736,000 barrels per day (bpd) in March, less than half the production in March 2018 and substantially reduced revenues for the Maduro regime. Two of the four breeders were reinitiated, after power cuts across the country left the breeders inoperable.

• It is estimated that 25 oil tankers with 12 million barrels remain stranded off the coast of Venezuela, due to difficulties in finding buyers. Reportedly, PDVSA is offering a 25% discount on the stranded crude, but requires buyers to load into the port.

• The interim government continues to provide humanitarian assistance to the Venezuelan people. In the first two weeks of April, it hosted 18 health fairs in more than 15 communities that provide medical care and hygiene to more than 6,000 Venezuelans.

• Diplomatic pressure resulted in fewer markets for Venezuelan gold. A bank in the United Arab Emirates canceled the purchase of gold from Venezuela and there are indications that gold exports to Turkey have declined.

• The United States has imposed visa restrictions on persons responsible for undermining democracy in Venezuela, including numerous officials aligned with Maduro and their families.

• Since January 10, 2019, the United States has revoked 718 visas, including 107 ex-diplomats. Visa records are confidential under US law, therefore, additional information about these people can not be provided. 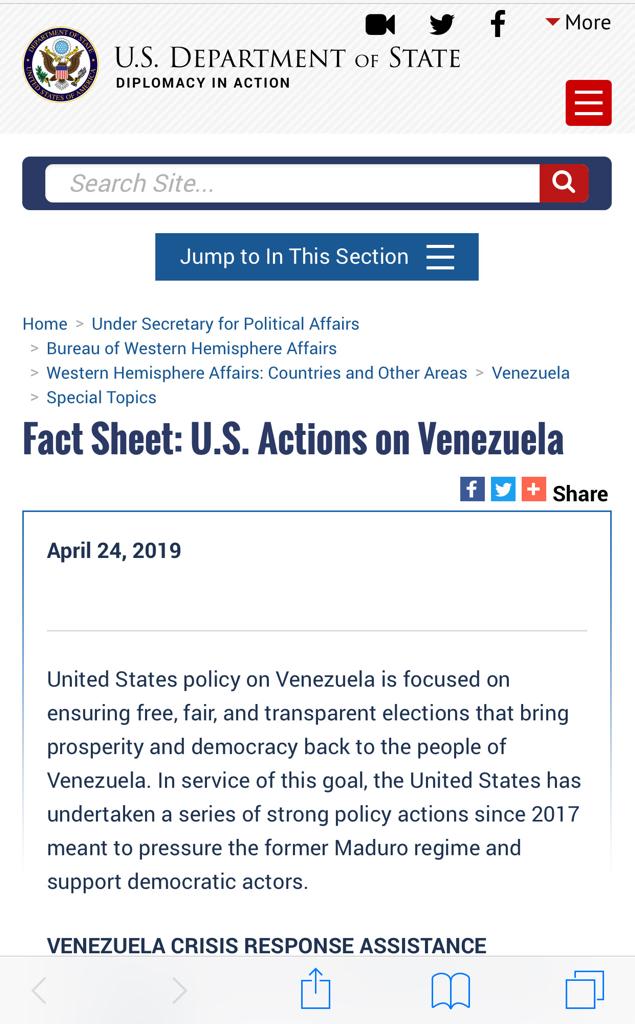