The Executive Secretariat of PAME salutes the thousands of workers, the unemployed, the youth, the women who under this year’s slogan “PEOPLE WILL NOT PAY AGAIN! THE VISIBLE ENEMY IS CAPITALISM“, participated and demonstrated in symbolic mobilizations in every city of the country. We also salute the thousands of workers, unemployed, self-employed, farmers, young men and women who are at home, and would like to demonstrate with us, to demonstrate massively as every year throughout Greece, honoring the International Day of the Working Class

We pay tribute to all those that died during the pandemic, around the world and with admiration to the heroic doctors and nurses who lost their lives fighting against the pandemic. At the same time they fight against the destroyed health systems of even the most “developed” capitalist countries. But “now is the time for struggle and for life.”

For the capitalists and the governments of capitalist countries, the pandemic has become an opportunity to violate workers’ rights. The pandemic has shown even more that the system of exploitation cannot be humanized. Only those who have an interest defend such a rotten system: the monopoly groups, their political staff and among them the trade union bourgeoisie, of the GSEE, whose president mocked the workers’ struggles during the pandemic.

Barbarity cannot be our future! Workers need to be prepared now for the next day, with the strengthening of our organization in every workplace. We have already paid a lot! We have paid the 10-year crisis of the exploitation system with countless sacrifices. We will not pay again. They are not invincible in the face of the organized power of the people! Law is the right of the worker!

Long live the International Day of the Working Class, a day of struggle of workers around the world! 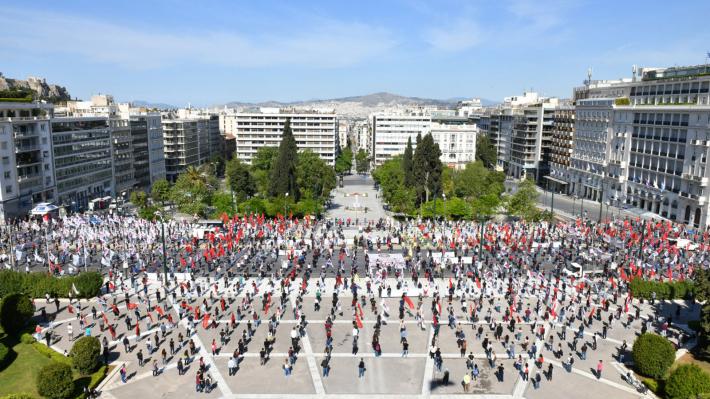