To commemorate this Saturday the 75th anniversary of the Soviet victory in the Great Patriotic War (1941-1945), the diplomatic mission of the Russian Federation in the Bolivarian Republic of Venezuela made a floral offering to the Liberator Simón Bolívar in the National Pantheon, in Caracas.

On this date, the definitive triumph of the Red Army of the Soviet Union against the fascist forces of Nazi Germany, materialized in a great extent by the heroic deed of the Russian people and other countries of the Union.

The President of the Republic, Nicolás Maduro Moros, expressed through Twitter: “I join the 75th anniversary of the victorious end of the Great Patriotic War against Nazi Germany, saluting our brother, Vladimir Putin and the Russian people. Victory which recalls the determination of a people to live in a world free from all forms of imperial domination”.

“75 years after the Soviet victory in the Great Patriotic War, Venezuela recognizes the heroism of men and women of the Russian people who gave their lives to save humanity from Nazi-fascism. Today we work with Russia to emerge victorious in a world of Peace”, also shared the People’s Power Minister for Foreign Relations, Jorge Arreaza, through his account @jaarreaza, along with an Official Statement on the historic commemoration.

At the wreath, along with the Russian ambassador to the country, Sergey Melik-Bagdasarov, Foreign Minister Arreaza and the Vice-president for the Economic Area, Tareck El Aissami, among other Bolivarian Government authorities, were present.

After making a brief account of the nearly 30 million human lives of the Soviet people that the war devastated and key moments of the Red Army in its advance towards victory against Hitler’s Nazi-fascism; The Venezuelan diplomat warned that the same threats, the same risks of that painful past are currently emerging.

“Today, the fascism also wants to impose itself on the world and we, with Russia, with President Vladimir Putin, are working together in all international forums to prevent this from happening. This is the time for the consolidation of the multipolar, multicenter world”, emphasized Minister Arreaza.

Ambassador Melik-Bagdasarov thanked the Venezuelan people and government for accompanying Russia in this historic moment, while expressing all the support and solidarity of his government with the Bolivarian Revolution.

In the last two decades, Venezuela and Russia have strengthened their relations through a strategic alliance that is consolidated at each meeting of the High Level Intergovernmental Commission (Cyan) between the two countries, mainly in energy, economic, technological, industrial and military matters.

On April 20, Presidents Nicolás Maduro and Vladimir Putin exchanged impressions over the health strategies they are developing to contain the spread of Covid-19, efforts in which the Eurasian giant supports Venezuela and as an example, on March 23, 10,000 tests for virus detection arrived in Bolivarian soil. 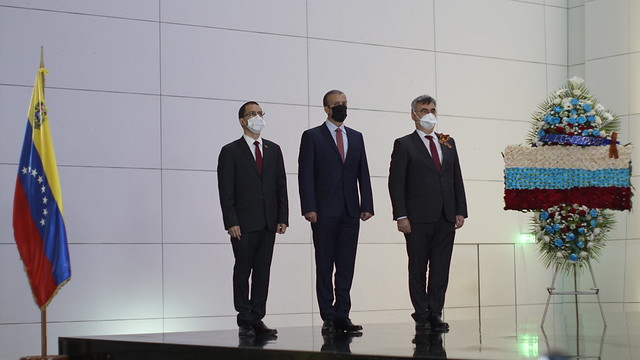